Xiao Long Bao, dumplings stuffed with broth. For those who want to know authentic Chinese food

Shanghai. We enter a fast food stand.  Everything is happening in the moment.  An enormous pile of bamboo baskets arrive from the kitchen, filled with freshly steamed Xiao Long Bao.

The people crowd around the counter, with tickets in hand, trying to be the first to receive a plate.  In fact, as soon as you enter the kitchen, you must order and pay the bill. The waitress patiently yet quickly distributes the Xiao Long Bao, carefully reviewing the receipts, and each customer returns to their table ready to enjoy these great raviolis (even though they are still very hot).

The surprise comes when you try eating one of the raviolis.  They explode in your mouth, leaving a very tasty and very hot broth!  It is essential to learn the tasting technique beforehand, so as not to burn your tongue…but first things first.

These stuffed Dim Sum, called Xiao Long Bao, are a true delight accessible to all.  It is a type of ravioli that, in addition to the magical broth, typically has a base filling of pork, ginger and rice wine, called shaoxing.  In other traditional versions, more appreciated for the filling, one will add crabmeat or crab roe to the raviolis.

It’s a good thing that the one who argued over the commotion was our Chinese friend Ling.  Otherwise, we would not have understood the system and we would have been left without our Xiao Long Bao!  There are no menus here, and far fewer photos of the dishes.  The available offer is written in Chinese on wooden boards hanging behind the cash register that disappear as the offers are sold.

It’s lunchtime, and in addition to the two Xiao Long Bao per person, Ling orders a fabulous Wonton soup for each of us, leaving us more than satisfied.  The total price for three people is 36 Yuanes, a little more than 4 Euros! A gift.

And to think that in order to make Xiao Long Bao, one by one, it takes careful manual work.  From a cylinder of dough, pieces are cut and spread with a small roller to form the circle shape that holds the filling. One person shapes the dough while the other is in charge of the filling, making certain that each circle of dough contains exactly 16 grams.  Finally, they have to close each one of the Xiao Long Bao by folding the dough 18 times, which the expert chefs are able to do in an instant, almost unperceivably as if it was a trick of the mind.

Now the only thing left is to try them.  But be aware, when they are freshly prepared the broth inside is very hot, and in order to eat them you have to use a precise technique.  Grab the Xiao Long Bao with chopsticks (because there are no forks, not even in the more “westernized” restaurants) and dip it in the sauce.  Contained in a small bowl, this sauce is a mix of rice vinegar and soy sauce with thin strands of julienne cut ginger.

Now comes the hardest part.  You have to twist the ravioli and support it with a teaspoon, taking a small bite of the pasta in order to make a hole and drink the broth slowly.  Then you can finally put the pasta in your mouth and eat the Xiao Long Bao! 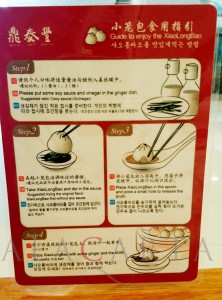 In Shanghai, they serve food in many street or fast food stands, and in traditional restaurants they often work in the basement.  They are always excellent, although the best restaurants are those that make very fine pasta, transforming it into a delicate skin that encloses the delicious filling.  The best ravioli also tend to be smaller.  In addition to the traditional fillings, tastes of “fusion” with Western cuisine have popped up in more modern restaurants and are also very well made.  These restaurants sell new types of stuffed ravioli, such as foie gras, truffle or cheese.  In fact, the best seller at restaurant Paradise Dynasty is the basket of “Signature Xiao Long Bao,” with 8 different ravioli, each one made from unique-colored dough and formed in a way that gives customers a spectacular presentation.  Price: 68 Yuan, a little more than 8 Euros.

But in this case we are in Pudong, the most luxurious area in Shanghai, with quality service and plenty of elbowroom at the table… In addition, this zone allows visitors to enjoy an excellent view of the impressive skyscrapers located in the city’s financial district, and to try many other plates from the traditional Chinese kitchen, which are also made very well.

The kitchen is visible from your table, which makes it possible to watch the preparation of the famous Xiao Long Bao.  All of this situated in a stylish and hygienic environment, where chefs and waiters prepare and serve the plates as if they were in an operating room, covered with a mask.

It is also true that Paradise Dynasty is a franchise restaurant, just like Din Tai Fung, the other famous restaurant for Xiao Long Bao.  However, the franchise concept in Asia is very different from ours.  Franchising represents the best option for a foreigner wishing to do business in China and up until now, has dominated the “survival” techniques used by foreign businessmen in the China.  In fact, the franchises do not possess that stigma of low quality to which we have become accustomed to in the West.  Rather, the creation of a restaurant chain is the natural evolution of a quality restaurant.  The good thing is that the high quality is maintained in all franchising cases.

It is interesting to note that the concept of quality, practically banished from the collective imagination in Maoist China, has been carried on by the so called “Chinese foreigners,” the migrants that were forced to take refuge in areas like Taiwan and Hong Kong during the cultural revolution of the 1960s and 70s.  Therefore, it is not by mere chance that Paradise Dynasty and Din Tai Fung are both Taiwanese chains, whose success derives from the importance of quality in Chinese gastronomy.  It is also true that the “Chinese foreigners” have good business sense.  In both cases, they are better prepared to serve foreigners, not only with English-written menus but also with a staff that is able to speak English (something that is not very common in Shanghai).

Once we have mastered the art of eating Xiao Long Bao and practiced using the Shanghai metro, it is time to jump in and try less touristy restaurants in different parts of the city so as to establish our own Top 10.   A trick to be used in this type of adventure is to make a Chinese friend who writes a grade that we can present in the restaurants that have not heard nor spoken the English language.

Ah, and the secret ingredient for the Xiao Long Bao filling is gelatin, broth made from ham, chicken bones and cartilage, and pork bones and cartilage, all mixed in with the filling.  The raviolis are then steamed (or pan fried, another typical preparation) to melt the gelatin and transform it into a delicious broth that remains inside the dough and is the key to the taste and texture of the Xiao Long Bao.