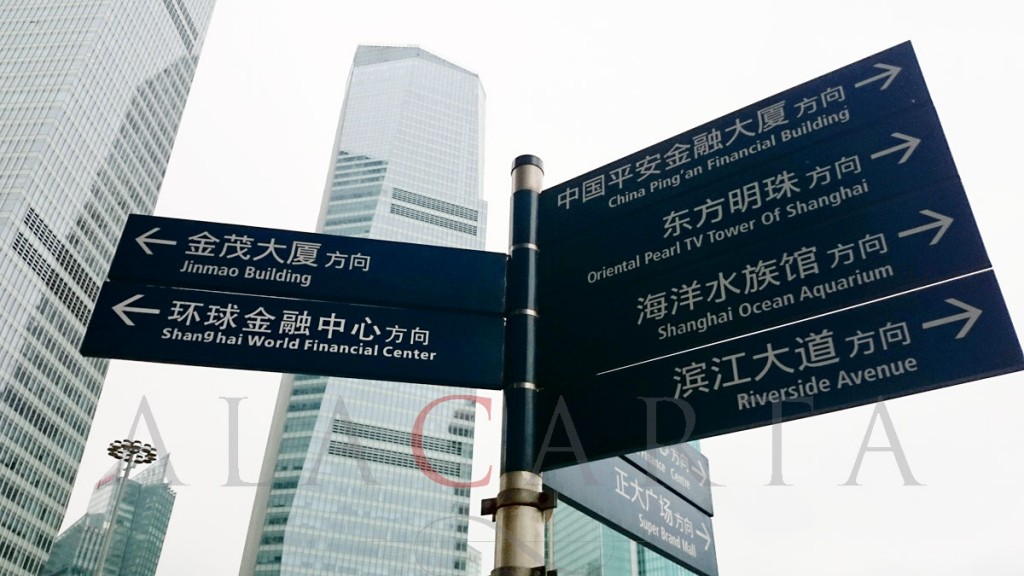 Before traveling to Shanghai I had tried to carefully prepare my gastronomic research plan.  From my hotel room in Pudong, I can see the entire finance district showcasing the city’s economic power, which is the second or perhaps the first world power.  These banks finance much of our public debt.

Some of the most expensive cars in the world drive around the streets of this district.  We come across a brand new Lamborghini, whose owner (surely one of the city’s new rich people) does not know how to drive…

I would like to find out if the economic boom involves the emergence of a culinary art, or at least if the large amount of money circulation has some influence on the city’s gastronomic offerings.  The question: Is it enough money to generate a restaurant revolution, or do we need more?

In order to begin, I consult the famous list, “Asia’s 50 Best Restaurants.”  Shanghai appears for the first time in eighth position with Paul Pairet’s Ultraviolet.  Pairet is a celebrity chef known for his multisensory psychedelic cuisine.  We return to the list and find Shanghai again in eleventh position with Mr&Mrs Bund. But these are both French food restaurants, which is not what I wanted (the same goes for Franck Bistro, number 48 on the list).

You have to search until number 26 on the list to find restaurant Fu1015, managed by chef Tony Lu.  The guide defines Lu’s cuisine as “refined Shanghainese dishes in an elegant and nostalgic setting.”  Much farther below, at number 46, you find Family Li Imperial Cuisine owned by chef Ivan Li.  Described as a “culinary glimpse from China’s imperial era,” it is famous for having recovered seventeenth century recipes intended for the Beijing imperial court.  If we exclude Hong Kong, the only other Chinese city on the list is Hangzhou (one hour from Shanghai via high speed train), coming in at number 33 with restaurant 28 HuBin Road.  It is run by chef Colin Cheng Yu and described as “an exploration of Hangzhou’s unique regional cuisine.”

In fact, Japanese cuisine dominates the list even more than India and Thailand (10 appearances from Japan, but its cuisine is also the basis of meals from other restaurants on the list).  “True” Chinese cuisine only appears on the list in some restaurants from Hong Kong and Singapore because the French influence is also very important in these regions.  Yet, much of the elite Asian gastronomy is still concentrated here (the list names Singapore more than Hong Kong with 9 Singapore mentions versus only 7 from Hong Kong).

In all cases, the formula for luxury Chinese restaurants is clear: traditional cuisine, made with quality ingredients and, most importantly, served in a magnificent home (even better if it’s a mansion or ancient palace with nostalgic ambiance that recalls the golden age of Shanghai before Mao Zedong’s regime).  Upon his arrival to power in 1949, Mao labeled any interest in gastronomy and fine dining as “decadent Western customs” that had to be severely challenged.  In those days, many dissidents and Chinese intellectuals were forced to seek refuge in Hong Kong, Taiwan, Macao or Singapore.  They were contemptuously called “Chinese from overseas,” but they were the only people who continued to cultivate traditional Chinese culture and a taste for good food.  It’s not a coincidence that today’s best restaurants for Chinese cuisine are only found in these regions.

Actually, Mao Zedong has become a culinary relic in recent years.  Maoist style restaurants have sprouted like wild mushrooms, serving the “emperor’s” favorite dishes.  He was known to enjoy all kinds of luxury in his mansion within the walls of the Forbidden City, while outside, millions of Chinese died from starvation.

Even Mao’s famous Little Red Book, burned by many at the end of China’s Cultural Revolution, has become an object of worship and imitation; there is always a line in the Bundt to get pictures with his statue.

Aside from Mao’s influence, we must take into account the latest Deng Xiaoping, who has brought about a true transformation in contemporary China with his economic reforms.   The country could be reminiscent of a vineyard cultivated on a bed of completely communist soil implanted with a graft of unbridled capitalism.  In fact, after many years of cultural repression the Chinese are rediscovering their nostalgic and traditionalist side, recovering a personal cultural identity similar to that of China from the early 40’s of last century.  Retro style mansions like Fu1015 and the Relais et Chateaux style of Family Li Imperical Cuisine originate from this time period.  It is most likely the economic boom that is allowing the Chinese to return to their roots, rediscovering and re-appropriating their history and traditional culture.  Moneymaking is accelerating this development.  Money alone.

But it is not only the famous list of restaurants that brings me to the conclusion above.  We head to the neighborhood of Jing’an, named after the eponymous Buddhist temple.  This district of downtown Shanghai used to house rich local merchants in large mansions up until 1949 when the government expropriated the district to convert homes into residencies for senior leaders of China’s Communist Party.  Today, Jing’an is the most luxurious shopping zone in the city.  Many expats live in this zone, as it is an ultramodern setting.  The most exclusive boutiques and trendy restaurants have set up shop in Jing’an as well.

Here, we find ourselves with Ze Li, a sommelier with more than 8 years of experience in Europe.  He has been fortunate to work between London and Shanghai, so his vision of the gastronomic industry is privileged.  I am very interested to know his opinion about the new Chinese gastronomy since his point of view is divided between Europe and China, between the declining West and the booming East.  Speaking of Shanghai’s saturated restaurant market, Ze Li does not even consider the possible existence of a modern Chinese cuisine.  According to him, great Chinese cuisine comes from Canton, one of the 8 big traditional schools in China.

And to the rest of the world, the culinary standard of excellence (as if it could be any other way) is Japanese food.  The Japanese are almost like an alter ego of the Chinese, neighbors historically united by a strong love-hate relationship.  This is clearly seen when visiting the gourmet sections of the city’s commercial centers: the basements of haute cuisine establishments are almost perfect imitations of Tokyo or Osaka.

Ze Li says that the Japanese have been known to export their food and their tradition without compromising their quality.  A Japanese who opens a restaurant in another country focuses all of his or her efforts on replicating exact tastes and traditional preparations.  The economic aspect is secondary.  The perfectionist work ethic of Japanese chefs is the true secret to their success.  They always carefully follow each and every step needed to prepare a dish, and would not think to skip so much as one part of the process, even whey they are not sure about its usefulness.

On the contrary, the Chinese who create restaurants in other countries worry only about how to recover their investment in the least time possible.  As a result, many of these restaurant owners introduce their businesses as low-price eateries.  This business model ignores the authenticity and quality of Chinese food as well as the promotion of Chinese culture.  But this is also a result of the fact that the Chinese do not possess the perfectionist character, respect for rules, or work ethic of the Japanese, both in the kitchen and beyond.  The Chinese chef prepares a dish placing importance only on the final product and not the preparation process.

In his conversation, Li does not mention even one great Western chef, so I ask him openly.  He settled the issue with a few considerations: French cuisine is too greasy, and above all, too expensive; Italian food contains simple flavors that please everyone and does not need overly expensive ingredients.  Period.

He insists that the standard of excellence for Chinese food is Cantonese, with its unique and exclusive ingredients.  And among the best restaurants in Shanghai, he does not mention any of the names that appear in “Asia’s 50 Best Restaurants.”  If he could open a restaurant without doubt, Li does not imagine himself as an avant-garde Chinese chef.  Maybe it’s the need to restore the great regional culinary tradition.

With an inclination to reclaim the past, but also benefit from nostalgia, we head back to Jing’an, traveling just a few blocks south to discover traditional Shikumen houses preserved by small neighborhoods.  Shikumen houses were two-story semi-detached townhouses constructed in the fourteenth century, expropriated and reallocated by Mao Zedong to address the enormous housing need generated by the rapid migration of China’s rural population toward the cities.  Thus, a whole family relocated to one Shikumen room, and some families live in these conditions even today.

A transformation has emerged in this area, creating a new face for the districts of Xintiandi and Tian Zi Fang.

Large companies and investors are now acquiring Shikumen, where so many misfortunes used to occur.  They are restructuring and transforming these buildings into a multitude of stores, bars and restaurants.  The result?  A new elegant commercial center available to the public.  Paco Roncero will soon open one of his “Estado Puro” stores in a Shikumen; signs are already posted to advertise the grand opening.

A few meters away there is a café where you can drink a kopi luwak coffee…the price of gold.  The tourist guides suggest many of the small restaurants in this zone, describing everything about their atmosphere.

Right next to the café, you will find the place where the Chinese Communist Party met for the first time.  There is still a plaque commemorating the location, in addition to the many tourist groups that take photos.

We continue our gastronomic research elsewhere, looking for authentic cuisine also sought by the “new overseas Chinese,” restaurants frequented by Chinese gourmands where foreigners dare not enter.  We ride the bullet train and set off to Suzhou.

Alfredo Maestro and the Ribera...