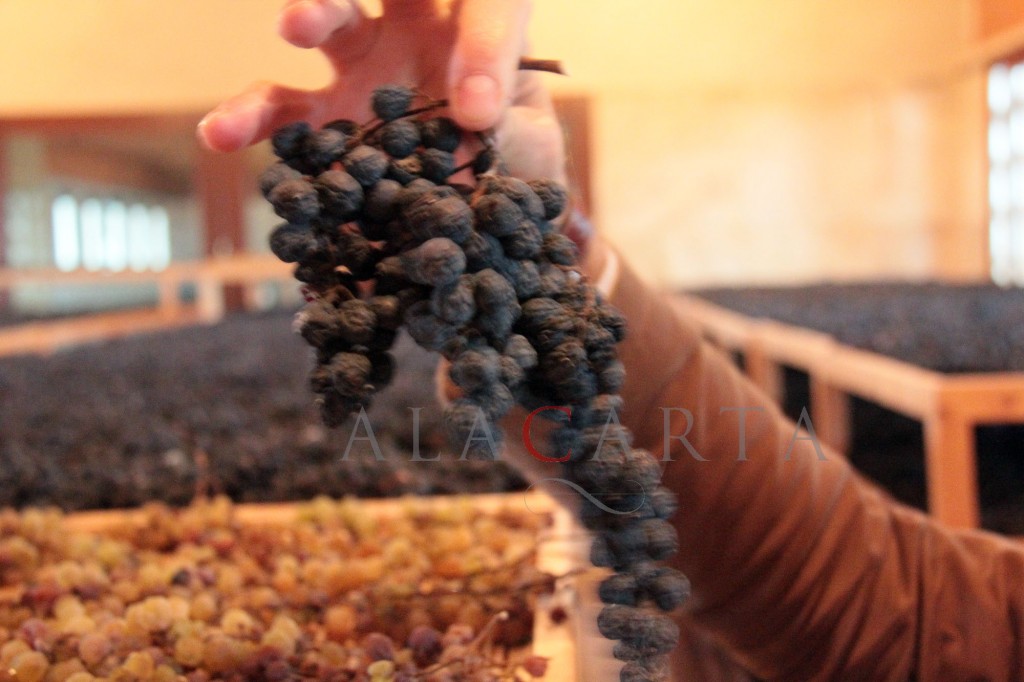 When I return to my homeland around Christmas time, I cannot keep myself from visiting Giampiero Bea, who always honors us with spectacular tastings.

At this time of year, the Sagrantino bunches destined for Passito are resting on mats waiting to reach the perfect pulp concentration.  The grape is drying slowly and naturally in a room, where thanks to manual regulation of the window openings, temperature and humidity are controlled in order to prevent mold. 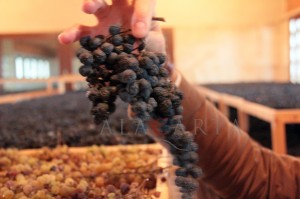 In addition to Passito Sagrantino, a white version of Passito traditionally existed as well, produced from the Trebbiamo Spoletino grape.  Giampiero has revived this tradition and has therefore reserved a few of his mats to hold the Trebbiano Spoletino grapes during the drying process.  Given the limited quantity of this specific grape vine, it is only intended for private use.  What a shame not to be able to enjoy it more often!It is a marvel to taste those sweet grains with Giampiero; they won’t be ready for Passito production until the skin is completely merged with the pulp.  In order to test it, simply bite a grape.  How rich!  Very sweet, but it isn’t “just right” quite yet…

Afterwards, we begin the long thorough wine tasting.  First, we try the wines that haven’t finished aging, the whites in steel tanks and the reds in barrels, so as to continue later in the tasting room with the full range of labels.

Arboreus is a special wine not only for the variety with which it is produced, but because it ferments and macerates at length with the skins, as done in the past.  In addition, during the aging in the tank, Bea adds the skins that were used for his family’s white Passito.  This style of white (almost “orange” given its intense color) enchants me, so I am well disposed.

It is important to note the type of grape that produces Arboreus, the trebbiano spoletino, should not be confused with other varieties called “trebbiano” from other areas, which are sometimes used to make wine of low quality.  Trebbiano spoletino is a variety native to the area (we are a few kilometers from Spoleto) that was about to disappear.  Fortunately, the grape has been recovering over the last few years and Bea has selected one of the oldest vineyards for his wine, which contains plants over 40 to 50 years old, mostly ungrafted.

The most surprising thing, especially after discovering the extraordinary and complex nature of this wine, is that it comes from vines cultivated using principles that are clearly different from those that apply to vineyards meant for quality wines, where the number of bunches per plant is usually controlled through pruning.  In contrast to these “aggressive” techniques, the Trebbiano spoletino vines that produce Arboreus grapes are cultivated Etruscan style, meaning supported (or “married”) on maples, reaching six meters in height and producing up to 50 kilograms of grapes per plant.  Giampiero shows us the photos of these vines: they are impressive.  We ask him how it is possible that these grapes can result in such high quality wines, to which he responds proudly, “It is the demonstration that must accompany nature and not dominate it: nature finds a way to auto-correct itself in order to achieve the best quality.”  According to Giempiero, there are no unique rules or standards applied to all vineyards.  Each terroir with their own specific characteristics lead to different grapes; one must allow the wine to express those characteristics.

Smell: Intense fruity aromas (green apple, peach and a touch of raisin) and honey base

The Revenge of 2006 Vigna San Valentino

An interesting anecdote that reflects Bea’s philosophy, a philosphy not shared by everyone at times, is what happened with the 2006 Vigna San Valentino, wine that was initially made for Rosso di Montefalco.  The regulatory board decided to reject the DO to this wine because, according to the board, it did not comply with the required quality criteria.  Giampiero had to commercialize that wine with the generic name of Umbria IGT and decided to explain what happened by means of a label, which read, “They said: lack of color and light rusting.”

But, as he says, “nature is wise, wiser than man.”

We taste the 2006 Vigna San Valentino contemporarily, the rejection still in force, and the 2005 San Valentino, which was accepted as Rosso di Montefalco DOC: it is evident that the 2006 bottle has more color and greater aromatic intensity than the 2005, which is clearly inferior even though it was originally accepted by the regulatory board. 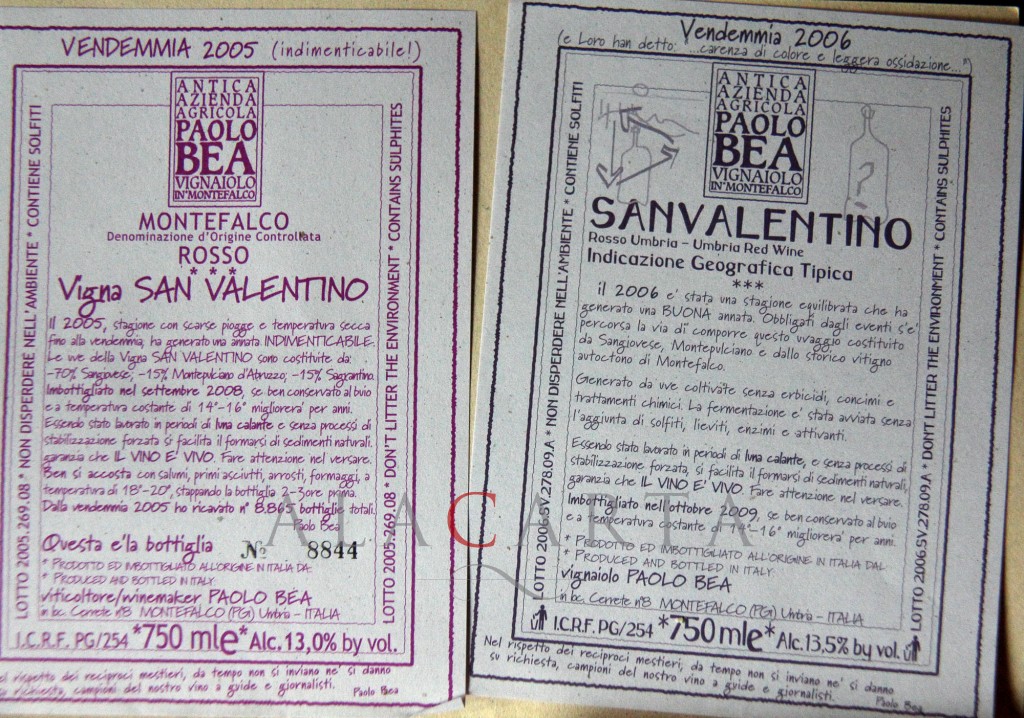 Sagrantino is undoubtedly the king of wines from this area.  Vigna Pagliaro is the label for Sagrantino Secco DOCG, produced by Bea.  It comes from grapes located in one of the oldest vineyards, aged 12 months in steel tanks and 24 months in Slovenian oak casks, then refined for another 12 months in-bottle.  The Bea’s consider it very important to use wood in a way that will support slow aging of this extremely potent grape: the wood must not add more tannin to the wine, which is already full of tannin produced in abundance by the grape.  Rather, the wood should help mature the wine.  So no small barrels.

Bea’s philosophy is clearly reflected in this wine – to be patient and wait for nature to do its work.  His Sagrantino DOCG always goes on sale later than those of the other producers.  His Sagrantino stands out not for its potency, but for its great elegance and complexity: a gift to the palate, fruity and spicy, with hints of chocolate and plums.

Bea also produces Sagrantino Passito, traditional wine.  The grapes are left to dry out on mats for 70 days, later used to make wine that requires 40 days of fermentation and maceration, plus four years of aging in steel tanks.  Although Bea’s price may seem high, the profitability of this wine is null, and he may even lose money.  From the 2006 vintage we taste, defined as seductive by Giampiero, only 2250 bottles have been produced, 375ml each.  They are an authentic piece of paradise!  Sweet but fresh, balanced, ample and fleshy.  A fruit concentrate and a tradition.

Smell: With more toasted aroma than the 2005, but always fruity and spicy.  Intense and complex fragrance.

Taste: Sweet but with good acidity, very good balance of sweetness and freshness, fleshy, ample and with volume.  Very long and fruity aftertaste.  A special wine.

Culinary Notes: how we accompany the tasting

In order to accompany the tastes of whites and reds from Sangiovese, Giampiero offers us some toast with “pane umbro con olio nuovo” and “pane con paté di fegatini di pollo.”  They are both very typical of our land, Umbrian bread slices with a drop of the new season’s extra virgin olive oil or with chicken liver pate.

Bread: Traditional Umbrian bread does not have salt and is similar to the more famous Tuscan bread.  Central Italy formerly belonged to the Papal States, which levied a special salt tax on their citizens.  In protest, the bread makers produced bread without salt.

Extra virgin olive oil: Umbria is not only the land of wine; it is also the only Italian region that possesses a designation of origin for olive oil covering the entire area.  The region is bursting with small-size high-quality artisan producers who make, among other things, Moraiolo olives, the star variety of olives.  Every year, when the new oil emerges, each producer gives the neighbors a taste of their own oil to see who made the best.  And everyone wants to try the new oil with a small slice of fresh or toasted bread.

Pate di Fegatini: This is a traditional pate made in my region, especially for Christmas, using chicken liver.  These days, you have to reserve the meat at the butcher’s shop because it disappears rapidly.  Each family has their own recipe, but I must say that Giampero’s mother prepares the best pate I have ever tasted.  By chance, she came during the tasting and I could not resist asking about her secret recipe. I may reveal it one day.

With Sagrantinos, the surprising combinations proposed by Giampero were the Crostata di prugne (a traditional plum cake similar to a Linzertarte) paired with dry Sagrantino and pieces of Parmigiano Reggiano paired with the Passito, contrary to what we had hoped (normally, sweet wine is paired with cake).  But everything is delicious.  The potency of the dry Sagrantino goes well with the crosata di prugne, while the Parmigiano complimented the sweetness and acidity of the Passito perfectly.