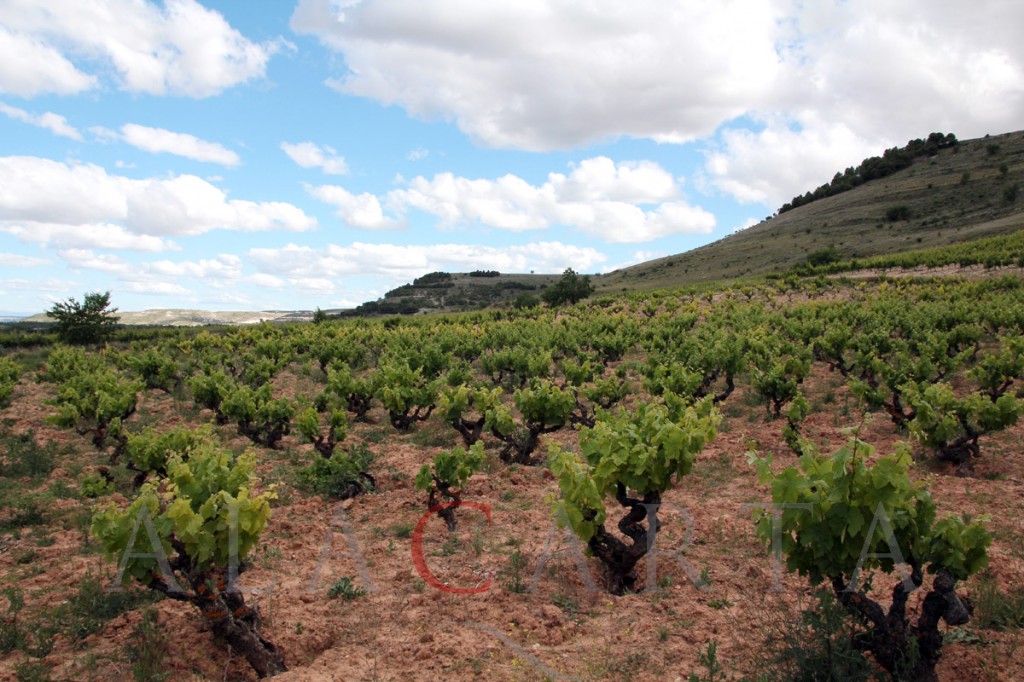 “That was the Ribera del Duero before the 80s,” says our friend Master Alfredo.

We are in a newly planted vineyard situated on a hillside with extraordinary views of Peñafiel and its castle.  In the 80s, pioneers like Jesús Anadón, Pablo Peñalba López, Alejandro Fernández and the Perez Pascuas brothers, among others, began the transformation of this land into the modern and famous denomination it is today, with the tempranillo grape serving as the principle protagonist. But that was not always the case.

In this age, flowers just become fruit – tempranillo grapes, yes, but also garnacha and albillo.  Because until recently, tempranillo was not the only thing cultivated in the Ribera del Duero (nor in Rioja).  Vineyards were small plots belonging to families who cultivated vines and produced wine for domestic consumption and little else.  Then, wine was a food product and quantity became more important.

In this newly planted vineyard, the vines seem like artwork with their old, thick trunks and their bark made of wrinkles and folds; their branches are so undulated with different winding forms that one might think the night came alive and moved them.  Each one of these wrinkles and curves are full of history, characters, anecdotes…

The ground is gravel, quartz and pebble stone mixed with sand because this hillside used to be the river base a long time ago, crossed by a vein of limestone.

And as a patient collector of artwork, Master Alfredo has been compiling and recovering these small old plots little by little as people no longer want to work on them. His work is to free the vines of residue left by chemical products with which they were treated and to revive many old vines that are nearly dead, patiently eliminating the “suckers”, the sprouts born from American roots that steal almost all the energy from the plant.  Little by little the soil springs back to life, the ecosystem recovers its equilibrium, and the vines become healthy enough to bear fruit. These grapes are the base of a wine that conveys the life and history of this environment, a lively wine full of energy. 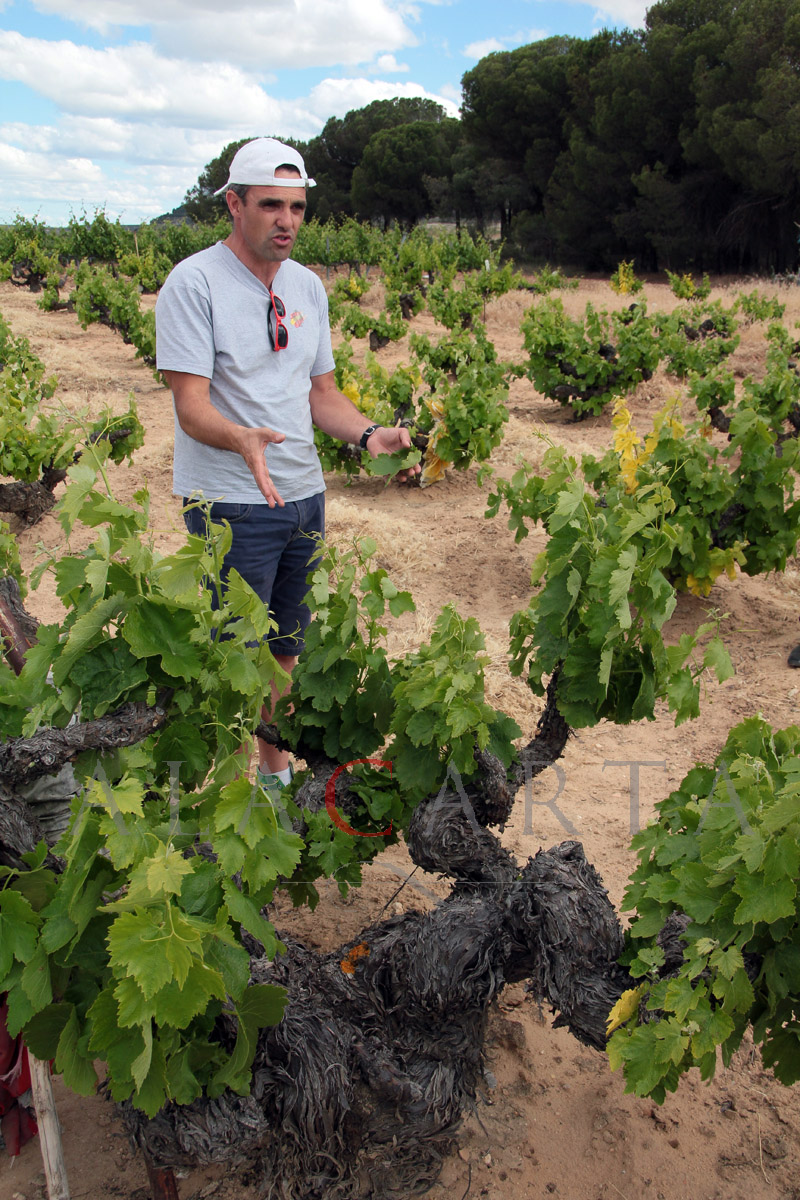 We are in the Ribera del Duero, but that is not important.  The important thing is to find vineyards as they existed before the tempranillo revolution, both within and outside of the DO’s geographic limits.  Alfredo, a Peñafiel native, began to solve the puzzle in the Ribera del Duero and thus earned the fame of “the village fool”. It has been three years since Alfredo began to recover vineyards, including those in the Sierra de Gredos.  In that time, Alfredo has also created El Rey del Glam (The King of Glam), who serves as a link between the two zones’ garnacha grapes, and Il Marciano (the Martian) as his main character. 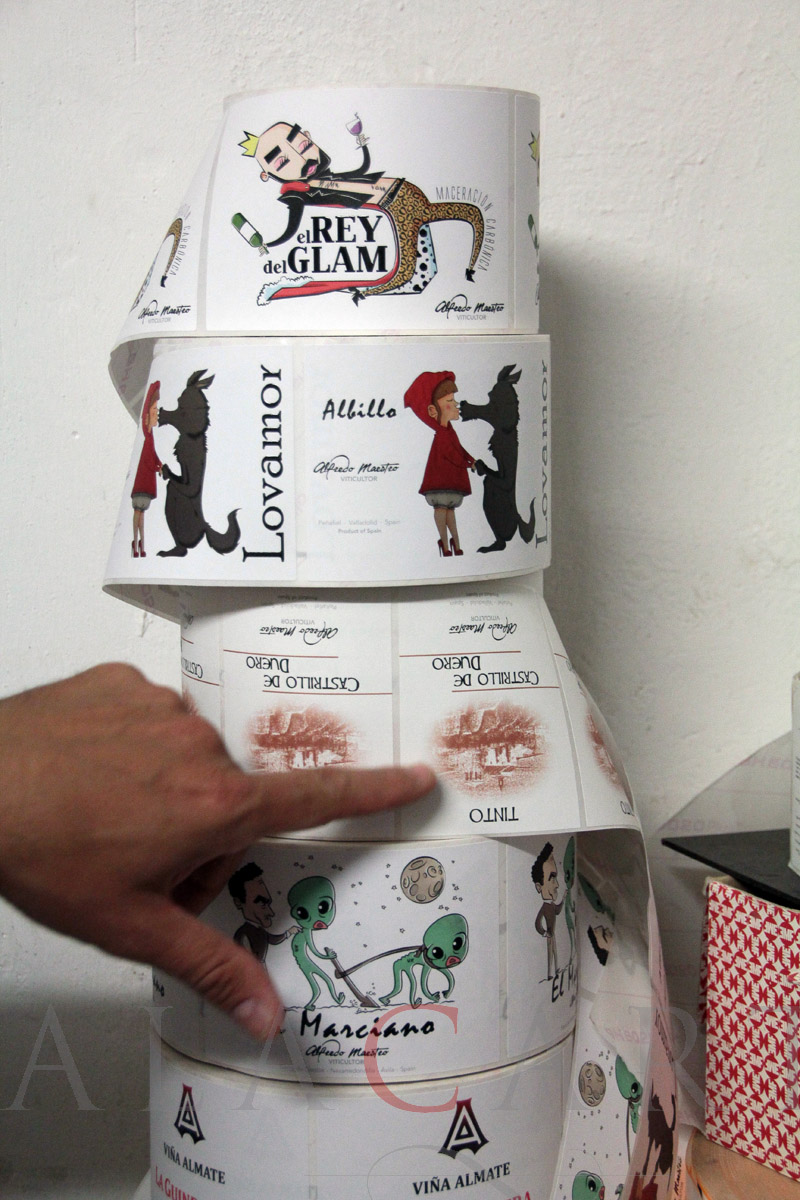 After the Ribera del Duero and the Sierra de Gredos, a new piece was found in Cigales; a 7.5 acre plot containing a mix of old vines almost 80 years old, including tempranillo, garnacha, palomino, and moscatel vines.  A rosé will grow in this vineyard, similar to those that were made in the past, allowing the grapes to macerate for 12 hours regardless of the rising color.  Surely, it will be a special rosé, very different from the modern Cigales made only with tempranillo grapes.  Here also, imitating the nearby Ribera del Duero that has become rich and famous with the tempranillo, people forget about the lesser varieties that had always been planted in the vineyard, not realizing that magic comes from these varieties and that exclusivity lies in the plots rich with different types of grapes.

But beware, we are not talking of a return to the past, we are talking about how to walk forward into the future.  The history of our wine culture denotes spending great amounts of effort to produce the highest amount of grapes possible (in the age of cooperatives) to creating modern wineries that prioritize quality, but plant great numbers of mono-varietal vineyards that need chemical support to produce and develop the grapes safely.  We are returning now to the concept of vigneron (the almost forgotten Castilian term for vintner), conscious of the fact that one must utilize scientific knowledge and techniques to produce wine without using poisons from the chemical industry, working in synergy with nature.  This is the secret of Master Alfredo wines.