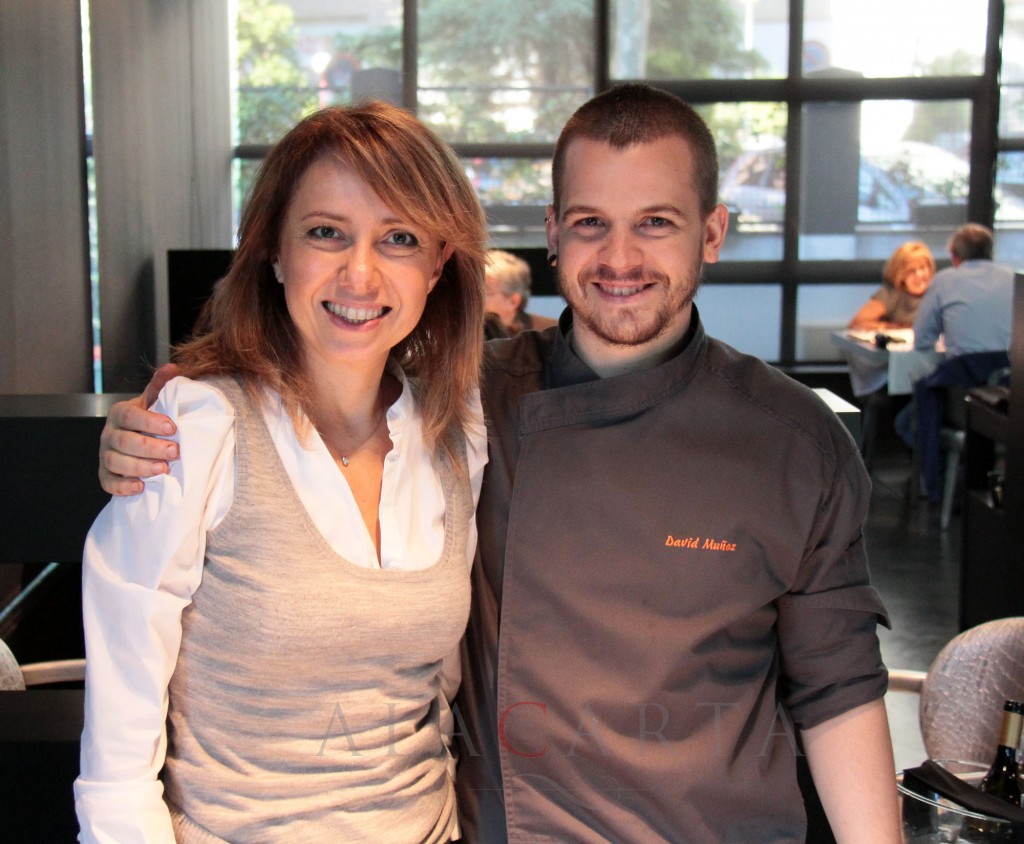 We are reposting this entry, written last year, a little after the Michelin Guide awarded Diverxo its second star.  David Muñoz continues to rise in his profession, having just entered the gastronomic Olympus with his third star.  We already expected this…

Diverxo restaurant, Madrid, November 2011.  David Muñoz is one of today’s great Chefs: he recently won two Michelin stars. To eat in his restaurant is a true fantasy.

David has personally revealed to us the secrets of his extraordinary cuisine.

Speaking with David about his cooking style, he suggests that I define it as “travelling kitchen”.  And it is true.  His cuisine makes you travel, but to a world of fantasy, perhaps to another planet, full of colors, happiness, fun and surprises.  You feel like Alice in Wonderland, where elements transform, distinct from what they seem; East becomes West, West easternizes.  Contrasts appear and disappear in the form of harmonious combinations.

As you would expect, David has traveled extensively, and it is through these travels that he finds inspiration.  The decisive step forward in defining David’s style emerged during his first tour of Southeast Asia.  It struck him how each bite was an authentic explosion of aromas and flavors, mixing spicy, salty, sweet and acidic, all in perfect balance.  He described the incredible complexity of Asian cuisine: full of color, exotic aromas, freshness and flavor combinations, all very different among each other yet able to achieve a surprising harmony.

He decided that his dishes had to provoke the same emotions.  This is the idea that David now has in mind when creating his dishes: try to make each bite a feast for the senses, full of surprises and happiness.  And that the customer’s dining experience is enjoyable, surprising and exciting.

In order to create new dishes, David tries to garner inspiration through that “surprising cuisine” idea, which is at the core of his style. An example.  He wanted to make a dish from fresh white beans, but it had to be something very different from the norm.  He began the process of breaking down the product, making a list of all the classic preparations in order to exclude them from all possible options.  Searching for a new elaboration, he decided to prepare them using a risotto technique, boiling the beans briefly and separating them from the cooking broth that sets to reduce.  With the reduction of the broth, the beans work as if they were a risotto, using duck butter to make them smoother.  David only needed to correct the acidity of the dish by trying different acidic ingredients.  The creation process continues like this with trial and error, until he refines his invention so that it achieves a perfect balance, combined with a surprising degree of complexity and innovation.

Upon entering Diverxo, you only need to choose the length of the menu and be swept along to enjoy.  His wine cellar is extraordinary but in my opinion, given the nature of the menu, we should stick to a sparkling or white wine with personality.

As it was my first visit, logically I chose the most extensive menu whose plates I describe below in short stories, reflecting on their creation as well as technique and preparation, which David shared with me in a previous meeting.

Edamame is a variety of fresh boiled soybeans, a very typical appetizer in Asia.  Here at Diverxo, it is accompanied by a small amount of spicy yellow aji (Peruvian chile pepper) sauce.

This is a slightly spicy sour soup that contains “sea noodles,” which are actually baby eels that have a very delicate flavor.  I ate the first version of this creation served on one plate.  Now Diverxo has a second part that consists of a crispy oxtail sandwich and baby eels served separately.  The idea is to bite it so that you experience an explosion of baby eels in your mouth, accentuating its taste and texture.

Re-invention of the famous Spanish mejillon rebozado (deep-fried mussels with béchamel sauce), served in a transparent container so that you can appreciate the different layers of preparation: crispy, creamy, tasty…

Crispy duck tongue that contrasts with the texture of the cococha (cod jaw) flavored with Szechuan pepper.

David wanted to make a true smoked belly so he bought a typical country barbeque grill and decided to use vegetable charcoal so that the heat would hold throughout the entire cooking process.  When it came time to prepare the plates, he added some dried vine shoots to the fire, causing the necessary amount of smoke while maintaining a very mild heat.  The belly is smoked on the grill for 15 minutes (skin-side so that it sweats) and a few moments before serving it, he airs the embers to give the tuna belly a wave of heat.

It is served with some dim sum made of quail egg yolk, which look like small fried eggs.  David prepares this dim sum with very thin dough similar to the kind of dough that wraps around raw yolks before frying them.  The outer part is very crispy while the inner liquid yolk explodes in your mouth.  It’s quite a surprise!

Crispy capon ravioli, cooked in a way that allows you to eat it with your hand, accompanied by a red shrimp mini-sandwich in which the shitake mushrooms act as the bread, all immersed in a flavorful capon broth reduction.

When this plate arrived, the bun reminded me of Vietnam and the mopeds that sell the buns on city streets and beaches along the countryside (I still remember how I took in the famous “ChinaBeach”).

But of course, this was different.  All the ingredients used are Mediterranean.  The filling speaks Spanish, Italian and French: chanterelles, truffles, cream, butter, all bound by tomato sauce.   The bun’s dough is also different.  It seems Asian in consistency, but it is not; and in addition, the dough is wrapped in an exquisite skin of milk (cream that is created on the surface by boiling milk; it does not appear naturally in today’s milk…only after boiling) and with a spectacular presentation on a vertical slice of cured cecina (Spanish smoked cured beef)!

This is a very complex dish that represents the evolution of one of David’s first creations, which he submitted to open the restaurant five years ago.  Initially, he tried a type of crepe made with suckling pig skin, inspired by the glazed Peking duck.  In this last version he has created an inverted canapé, making the pigskin a holder while the bread serves as the content of this supposed canapé.

This dish is served in two parts.  The first is the inverted canapé, which is presented on a spectacular stand.  The pigskin supports a creamy black sesame brioche, trout roe, cucumber and touch of plum sauce.

The second part comes in a box for hamburgers, accompanied by a glass of sauce.  The box contains a mini hamburger made with specialty cut pork, lettuce, basil and mint leaves, onion sprouts… The special pork is steamed to remove the meat’s excess fat and seasoned with ingredients that give it fragrance and freshness, like chives and ginger.

If these ingredients bring us close to Asia, the way we eat this dish brings us even closer.  Just as Vietnamese rolls are made, the meat is wrapped in lettuce and dipped in a sauce made with a pepper, garlic and oregano base.  Lime and lemon juice give it acidity and fish sauce, also of Vietnamese origin, fills it with flavor.

9. Red mullet with marinated with tomatillo and tabasco, with flowers and herbs fried backwards

The surprising feature about this dish is the preparation of its ingredients.  Instead of placing the ingredients in a fryer, they are brought to the table and fried “backwards,” spraying the assembled plate with burning oil.

The monkfish is quickly dipped in soy sauce and cooked in a very, very hot wok in order to seal and maintain its tender interior.  The soy sauce not only strengthens the wok-cooked taste, but it also gives the fish a color that makes it appear as meat.  Decorated with slices of purple potato that look like authentic 3-D brush strokes, an asparagus shoot and a touch of yuzu.

Given his Asian inspiration, I thought David had wanted to create a landscape of Kaiseki style Japanese food through this dish.  But no, I was wrong again.  His idea behind this presentation was to confuse the ingredients with the creative form of the ceramic plate, producing a fusion effect among them and a sensation of movement, as if they were ocean waves.  Hence the foam.  In the end, my first impression was not so misguided…

We began with the desserts, some of the best that I have tried in my life.  The subtlety of the combination of flavors and textures, the East/West and sweet/salty contrasts showed David’s mastery of surprising the diner yet again.

You could say that the presentation of this dessert is the most spectacular out of the entire menu.  He brings it to the table with a crystal cloche.  But it is not a normal cloche; it seems more like a gnome’s hat that reveals a fantasy landscape within.

The base of the dessert contains typical violet Madrid candy.  They are dissolved in cream in order to prepare the dough that is wrapped in coconut powder. It looks like clouds of candy (marshmallows) or a violet guimauve.  On top of that is a purple cotton candy accompanied by tonka bean ice cream that gives it a touch of fragrance, freshness and acidity all at once.

Although it does not seem possible, the surprises continue, and in crescendo.  With this creation David wanted to play with the ambiguity of the presentation.  The dish is apparently something completely different from what it seems.

David prepares a white chocolate mousse that freezes in small hemispherical molds, which are later dipped in cocoa butter mixed with black olive juice.  The temperature contrast between the frozen mold and lukewarm butter makes the butter create an outer laminate that perfectly seals the mousse while simultaneously keeping the liquid inside.  It is a technique invented by Ferrán Adriá when he created an abstract version of the Sacher cake.

David presents the balls of mousse as if they were black olives, accompanying them with a green apple ice cream that gives it freshness and acidity, on a base of olive oil.  In order to complete the dish: a celery stick that is not celery but a roll of white chocolate and foam, which is actually foam derived from celery.

Another surprise: mixing dark chocolate with two different gelatinous textures. On one side – passion fruit.  On the other side – a green tea gelatin laminate.

In search of the best croissan...