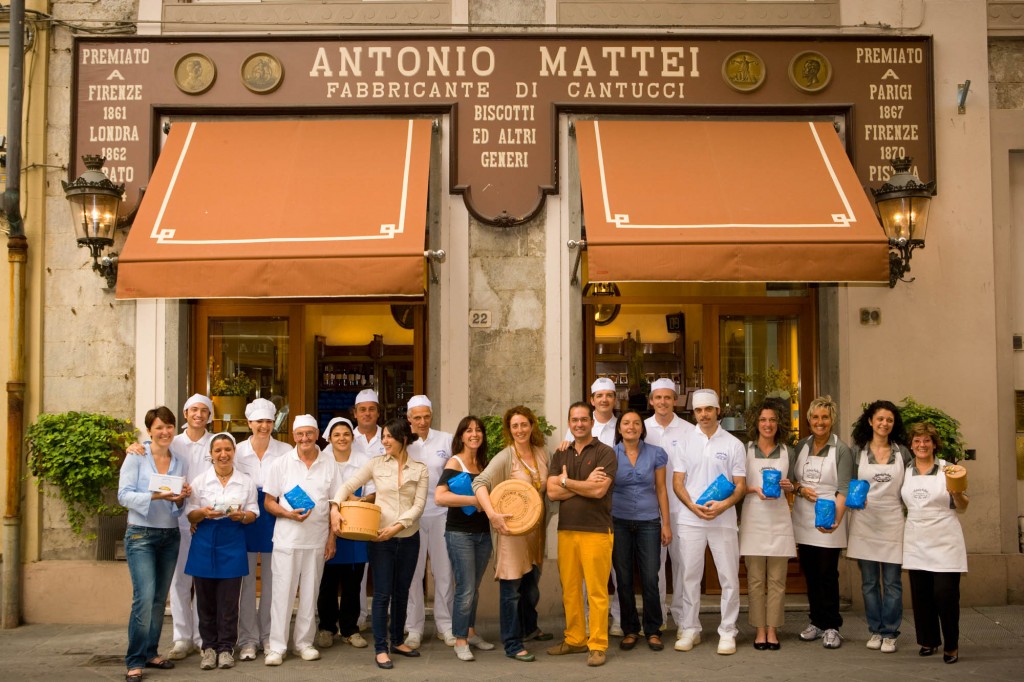 All traditional Tuscan meals end with the customary dipping of the Cantuccini in a small glass of Vinsanto, the sweet wine of this region.  Cantuccini is a very crunchy type of biscuit with almonds that melts in your mouth after being soaked in wine.  The biscuits can be eaten alone or accompanied with a cup of coffee, but without a doubt, these biscuits are addicting and, as with sunflower seeds, you can’t stop eating them one after the other.

The name given to these types of almond biscuits (common in gourmet stores throughout the world) has a story.  Outside of Italy they are frequently called biscotti, which is not entirely accurate since the name biscotto (biscotti is the plural form) comes from bis+cotto, which literally means twice-baked, and in Spanish corresponds to the generic term “cookie” (any type of cookie).  In Italy, we commonly call this particular type of biscuit Cantuccini.  However, in Prato, a city near Florence, they are more correctly called Biscotti di Prato, as this city claims ownership to these biscuits.  The term Cantuccini applies to an older, simpler type of biscuit, made with anise, but without almonds.  In reality, the two biscuit types, Cantuccini and biscotti di Prato, have a common origin and it seems that they are simply different parts of the same biscuit bar.  Cantuccino (singular form of Cantuccini) comes from the word cantuccio, meaning small edge or end, so these biscuits were probably the end pieces of the biscotti di Prato bar, cut and sold at a cheaper price for being the edges and, above all, for not containing almonds.

The historic producer of these biscuits, Antonio Mattei, gave fame to these biscuits by wrapping them in a Savoy blue bag and bringing them first to the Florence Exhibition in 1861, then later to the Universal Exhibition in Paris in 1867.  Mattei was Florentine, founder of the most famous biscuit factory in Prato, and a close friend of Pellegrino Artusi, author of the first Italian cuisine handbook.  Among the first amateurs to these delicious cantuccini is the German writer Herman Hesse, who in the book “From Italy,” speaks of the Biscotti di Prato as biscuits so rich they put you in a good mood.

Mattei’s heirs say his recipe is still secret, like the recipe of Coca Cola.  But in reality there is no one single authentic formula.  The truth is, as with most traditional recipes, each family has their own version.

In searching for the perfect recipe (and I’ve tried quite a few) I have taken mountains of Cantuccini out of the oven and passed them along to friends, filling their houses with biscotti… After this research process, I have decided to stick with the following formula – a hearty combination of flour, sugar, eggs and almonds.  I invite you to try the recipe, as it is very easy and the cantuccini stay fresh for a long time when stored in a tin box free of humidity.

Variations on this recipe are almost infinite.  I always add a handful of anise, but you can use any kind of nut, chocolate chip, tea or coco powder, just to give some ideas… Here you have the perfect recipe:

Mix the flour with the sugar, baking powder and pinch of salt.  Add the lightly beaten eggs.  Knead quickly and add the almonds at the end.  Knead the dough just so and create 2 or 3 cylinders about 3cm in diameter.  Cook them at 350 degrees Fahrenheit for 20 to 25 minutes.

Remove the bars from the oven and, while they are still hot, cut diagonal slices about 1cm thick.  Arrange the slices horizontally and return them to the oven for 5 to 10 minutes until they are completely dry.

In search of the best croissan...