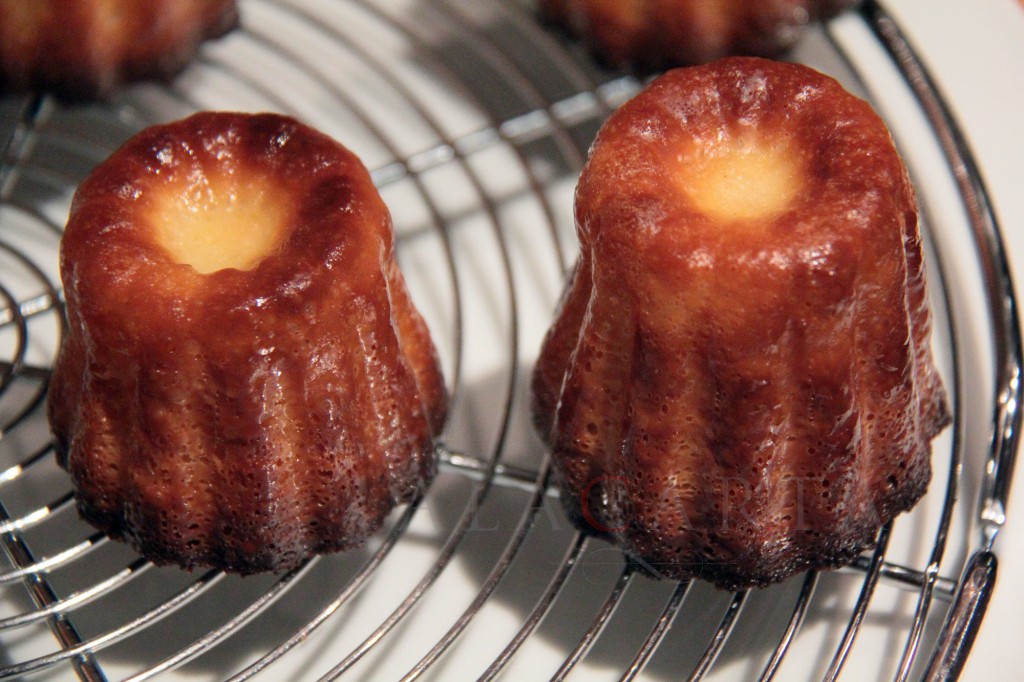 Bordeaux is not only the motherland of great wines, but also home to an exquisite little cake called the Cannelé or Canelé.  Many of the city bakeries sell Cannelés of all sizes, delivered to the customer in precious boxes as if they were real jewels.  The most famous Cannelés come from Baillardran, a bakery that has a dozen outlets between Paris and the Gironde region.

The Cannelé is an ancient dessert born in a convent during the 16th century, easily prepared using just a few simple ingredients.  It has an extraordinary taste and texture; the surface is caramelized and crispy while the interior remains moist and elastic, a texture that the French define “moelleux.”  It is not a coincidence that, as with other traditional cakes from winemaking regions, egg yolk is the primary ingredient.  Since wine is clarified with fresh egg whites, all of the egg yolks remain as leftovers and need to be used elsewhere.  Oddly enough, while the name may suggest otherwise, the cake does not have anything to do with cinnamon (it is not even one of the ingredients).  Cannelé refers to the cake mold’s corrugated shape.

If you have the opportunity to pass through Bordeaux and, in addition to tasting the Cannelés, you want to make the dessert at home, go just behind the Marché des Grands Hommes and look for the hardware store, Droguerie Béjottes, selling essential (and hard to find) molds for baking Cannelés.  The store has molds of all sizes and materials, including traditional copper, Teflon (PTFE) and silicon, the most modern and practical mold.  In fact, the mold is almost the most important part of Cannelé preparation since the quality of the cake depends on the browning of the crust.  The best molds are made of copper, the best heat conductor, but these are expensive and must be coated with butter (although a spray is also available for coating).  Silicon molds are more practical since they are flexible and facilitate the de-molding process.  Teflon molds are the middle ground.  They are more economical than copper molds, but also rigid.  Don’t miss out on the opportunity to purchase one.  It is the only tool that will allow for a simple homemade Cannelé preparation, and you will save yourself a fortune.  The cake is very expensive in bakeries…

While there are several recipes, I use the recipe from Mercotte with silicon molds, and you have to start preparing a day before baking.

Bring the milk to a boil with the vanilla and the butter.  Meanwhile, mix the flour and sugar in a bowl.  Beat the eggs lightly (without frothing) and add them to the bowl.  Mix until smooth.  Pour the hot milk into the bowl and mix until it resembles dough used to make crepes.  Finish by adding the rum.

Remove from the oven and let it cool a little before de-molding the cakes.

They go very well with a good coffee, better if the Cannelés are still warm and crispy (the crust becomes soft as time passes).